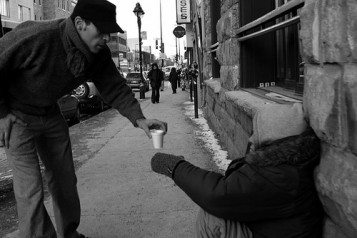 Last week I bumped into a car while backing out of my parking stall in a downtown lot.  That familiar feeling in my gut was immediate, as was the monologue in my brain wondering how I could have been so dumb.  I reluctantly emerged from my vehicle to inspect the damage and to trade the customary info, imagining how my insurance rates were going to take a jump.  We both met at the site of the injury, a smallish 10 cm indentation in his left front fender.  I began by apologizing, not sure how I could have missed the sight of his vehicle, while he surprised me with a calm and comforting attitude, telling me not to worry.  We both stood there for a moment, wondering what to do next, until I suggested he pop open the hood.  I reached inside the fender-well and managed to pop most of the indentation back to life, all that remained was a small 5 cm crease.  He gave me his number and asked me to call if I had any other ideas, and with that we both headed on our way.

This trusting gesture on his part made me even more determined to follow through with a plan to somehow make amends — a mend.  When I returned home I made a few calls.  A man who comes to your home to fix small dents was in Alberta for the next two months, another place could possibly fix it but the car would have to be left.  I phoned the gentleman to give him the results of my queries and suggested I come over with some tools to see if I could fix it for him.

I arrived the next morning, tools in hand, determined to make it right.  We met in the parking lot outside of his apartment building, and I extracted the various bits of metal I thought surely would smooth out this little crease.  After several attempts I realized it was beyond my abilities.  Once again he was so at ease about it all, putting the whole thing in its proper perspective.  It’s funny how I can recall other instances, people yelling, crying, summoning police, examining drivers licenses and insurance papers.  Rarely have I experienced  kindness or calm in similar situations.

With my hands now covered with grease, my new found friend invited me up to wash my hands.  I entered a small clean and sparsely furnished  apartment.  I washed my hands and was invited to a cup of tea.  My accidental friend and I sat down over tea and a small plate of treats and talked about our lives for the next half hour.  For the rest of the week I felt as if I had been infected with kindness and I felt this inner desire to share it with everyone around me. I was amazed how this one small gesture had lifted my spirits and moved me to similar small acts of kindness and compassion.  So take a chance this week, surprise someone with a kind gesture and watch it spread.